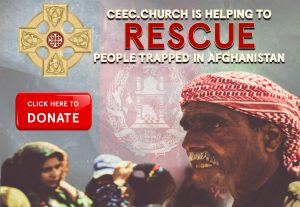 The Continuing Evangelical Episcopal Communion is directly involved in the rescue of Afghanis, along with a number of other Churches, NGO’s, and private individuals.

Donations designated for Afghan relief and humanitarian assistance have been received, and hundreds of thousands of dollars have been deployed in the past few weeks. LIVES ARE BEING SAVED.

We have several groups providing us with specific names and locations of people in desperate need of being rescued, teams going in and out of Afghanistan extracting people to safe locations, rescued people being protected, fed and cared for in safe houses, and plans for onward movement to permanent locations being implemented. 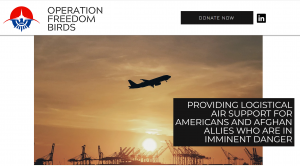 Operation Freedom Birds is being run primarily by a growing list of 50+ individuals who have become working teams and they are all volunteers. This means that each individual, professional, and expert has put his or her life on hold to assist other Americans and Afghan allies.

Spearheaded by James Young, Harold Earls, David Oyler, Tamara Edwards, and Loren Bembry, and countless others who have donated, coordinated, supported their time and effort to help SAFELY get our people home.

Operations Freedom Birds positioned to be a legitimate nonprofit rescue airliner and has  open lines of communication, partnerships, and intelligence with the FBI, DoS, DHS, DoD, Members of the U.S. Congress, Subject Matter Experts, and Current and Former Congressional Aides. 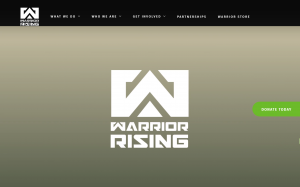 Warrior Rising is a family of supporters helping veteran entrepreneurs, which we call vetrepreneurs, to start or accelerate their businesses. Founded in Utah in 2015 by former military veterans and strong supporters of the military, we seek to make a difference for those veterans who want to continue to serve, lead, profit from their own achievement, and be their own boss.

Since inception, the organization has grown from a regional organization to a national one, helping veterans from every state in the union, being their business battle buddy, and fostering a sense of belonging as members of the Warrior Rising tribe.

First and foremost, we’re a small veteran and family owned business.  This business is both our passion AND our livelihood.  As such, we value each and every single customer as if YOU are our ONLY customer, because in times like these particularly, each and every customer we have is THAT important to us.  We value you, your happiness, your satisfaction, and your business.  Because of that, we pride ourselves on being exceedingly easy to work with.  If you’re not happy with your purchase, let us know in a reasonable time and manner and we’ll set up a return for refund.  Please keep in mind that whatever you’re returning, we need to be able to resell (unless it’s faulty, damaged, etc), so please be careful not to damage the packaging as best you can.  At the end of the day, all the legalese that follows doesn’t change the fact that your satisfaction is our priority #1, we just have to have the legal mumbo jumbo below.

FROM AMERICAN SOLDIER TO AFGHAN LEGEND

Since the fall of Kabul in August 2021, he has assisted hundreds of at-risk Afghans to safety including U.S. citizens, U.S. lawful permanent residents, Christians and other minorities as well as our vetted Afghan allies. Most recently, he returned to Afghanistan to personally aid in the evacuations.

He continues to workday and night with numerous stakeholder groups who call on “Legend” to assist those in desperate need. Prior to the 2021 evacuation efforts, he served in the U.S. military directly in Afghanistan and then focused on anti-terrorist efforts for numerous U.S. government agencies.

Days before 9/11, he came to the U.S. from Afghanistan as a teenage refugee with a bag of clothes and limited English. He joined the U.S. Army only a few years later. “Legend” has been fighting for American freedoms, liberty, and prosperity ever since.